The right to forget. On cancer prevention


Marta Tibaldi
The right to forget. On cancer prevention

Three days of events to raise awareness on breast cancer and its prevention as well as to raise funds: on May 16-17-18, 2014 was held in Rome the fifteenth edition of the Race for the Cure, organized by Susan G. Komen Italy , the first European affiliate of Susan G. Komen for the Cure in Dallas, an organization that has worked in this field for over thirty years. Three days of health, sport and wellness that ended with the race and the walk of solidarity at the Circus Maximus in Rome. As usual the so-called Women in Pink, breast surgery patients wearing a pink shirt and a pink hat to witness firsthand their experience of disease and survival attended the event.

I think about this great collective mobilization and ask myself some questions. There is no doubt that meeting, talking, sharing, testifying, being together are highly beneficial elements for sick people, for those who are afraid of getting sick, for those who want to be informed about the prevention, etc. and that these activities can help men and women - breast cancer affects men as well! -  not to feel alone and in despair.

However I cannot help noticing that for the last few years on a collective level, a shift has taken place from the modality of not speaking of the disease – in the past years the world “cancer” could not even be named - to the opposite polarity of speaking of it often,  involving more and more in a direct and active way both the sick and the healthy people, which would require a critical reflection (M. Tibaldi, Oltre il cancro. Trasformare creativamente la malattia che temiamo di più, La Lepre, Roma 2010). 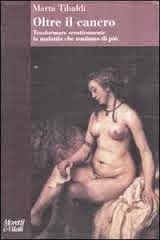 In psychoanalysis, the term "reaction formation" is referred to one of the defence mechanisms to control disturbing emotions such as the fear of disease, for example, by assuming attitudes which accentuate the opposite trend. If in the past years the fear of cancer was exorcised by silence and denial, today the excessive talking and sharing could remind such a mechanism of defence.

An interesting example in this direction might concern nutrition (T.C. Campbell-T.M. Campbell II, The China Study, BenBella Books, Dallas 2006): a very important, meritorious and unavoidable approach to cancer prevention, but that still requires a critical vigilance. In recent years we have witnessed in particular the phenomenon of preventive dieting to protect from illness and its relapses: whole grains, legumes, seeds, vegetables and fruit, following a diet that ranges from vegetarian to  vegan and to macrobiotic and distorts completely our Western eating habits. From these approaches also derive the most diverse practical applications, with an endless supply of courses, seminars, workshops, organic food stores or trying to be such, kitchen equipment etc. not always only inspired by the well-being of the patient. Sometimes this preventing food can turn into an additional stressful  lifestyle.

In this regard I want to remind the project Diana 5 by the National Cancer Institute of Milan. The objective of the research is/was  to "assess whether a healthy diet and an adequate physical activity can reduce the risk of recurrences in breast cancer”. Unfortunately the patients in Rome who took part in the project and had believed in it, have been involved in a questionable management of the group in central Italy, which led to the dissolution of the local project and the group itself, with serious traumatic effects on the ill women. After they radically changed their eating habits, they were left to themselves, facing alone also some physical problems derived from it.

Breast cancer patients definitely need to speak out and to share their diseases and their stories with other patients and wish to be informed and to participate in projects such as the prevention through food, but they also need to live their lives forgetting their illness as far as possible: a good cancer prevention goes also in the direction of patients’ non-involvement in everything is moving under the sun (and in the shadow) of oncologic care. A good life is not only cancer prevention, it is much more than this.

Hence long live to the Race for the Cure and to its collective mobilization, but long life also to those who consciously choose not to take part in it.
Copyright 2014