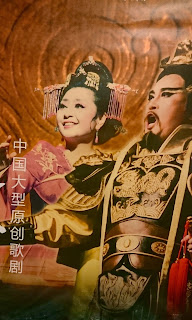 at the Piccolo Teatro Strehler


The Grand Canal, on July 12 and 13, 2015 on the stage in Rome (on July 15 and 16, 2015 at the Piccolo Teatro Strehler in Milano), is an original Chinese opera written by the composer Tang Jianping. The play is about the digging and navigation of the Grand Canal, the giantic construction created under the Sui and Tang dynasties (618-690 - 705-907), linking the Yellow River, Huaihe River and Yangtze River.

Despite Li Yuan, the Duke of Tang, warned the Emperor Yang Guang not to realize the Grand Canal because people were exhausted by years of wars and would not survive his request, the Emperor let him be flattered by the Guard Commander Yuwen Huaji and decided to construct it against every opinion. As foreseen by Li Yuan, the gigantic undertaking turns into the Emperor's ruin because of the workers' revolt. Li Yuan raises then an army against the Sui Dinasty, brings peace to the country and ascends the throne. 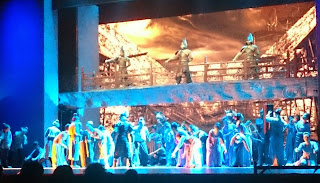 The Empress Xiao ends up in Tujie, in ancient China. Li Yuan invites her to come back but she considers Li Yuan's request fake and risky. Only when the new Emperor promises her not to tarnish Yang Guang's memory, to carry on his  great cause and to let her be buried with him, she consents to came back, focusing more on the logistic aspect of the Grand Canal than on the communication with the public.

The new Emperor Li Yuan is aware that this lack of communication was the Sui dynasty's great mistake and he advices his sons not to make it again. He teaches his sons that  "People are waters. Water can carry a boat but sink it too. Such apparent law of life will never be forgotten!" Following this advice, the Tang Dynasty accomplishes a long time of prosperity. 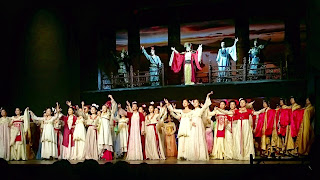 Great singers, strong emotions, powerful music: the contemporary Chinese opera The Grand Canal let me experience the cultural difference between East and West in a direct way, noticing how much cross-cultural encounters are living stimuli toward a mutual understanding. According  to the anthropologist Peter Adler (1975), when you process a cultural impact in a conscious way you will achieve an enlargment of your cultural horizon and of your self-awareness. Hence meeting a different culture is the first step on the path of a cross-cultural communication.

As Jungian analyst, looking at the Chinese Opera The Grand Canal, I noticed also how the archetypal motives featured by the main characters -  deceit, betrayal, ambition, love, wisdom - are the same both in East and in West although processed in different forms and images. As "water can carry a boat but sink it too", a respectful cross-cultural communication is the path to peace and harmony among cultures: from this perspective, the Chinese Opera The Grand Canal  acts as a strong valuable invitation  to communicate always and at all levels.